SANTORINI IS ONE OF THE MOST BEAUTIFUL ISLAND IN THE WORLD

SANTORINI IS ONE OF THE MOST BEAUTIFUL ISLAND IN THE WORLD

Located at the south Aegean Sea, Santorini is considered the world’s most famous Greek Island with over two million tourists visiting each year. Formerly a single island, the great volcanic eruption of 1, 600 b.c formed the current geological caldera. This place was formerly called Kallíste meaning the most beautiful one, or strongile which means the circular one or Thera. Its current name, Santorini, was derived from the name of an old cathedral in the village of Perissa named Saint Irene. Out of the 227 inhabited islands of Greece, Santorini is hailed as the best because of its alluring beaches, flawless scenery, enthralling ancient cities, sumptuous hotels and restaurants, the world’s best wine and the active volcano. It is easily recognizable for its whitewashed, cube-shaped buildings embellished with blue accents. The combination of these things is what made Santorini a popular destination for tourists around the world.

Santorini is the best island to visit because of its distinct beaches incomparable from any other beaches around the world as it provides a sight which you will not see in other islands. Unlike the usual white sand and pebbles of other shores, Santorini beaches are made up of red and black volcanic pebbles, resulting from the great eruption which happened in 1, 600 b.c. Aside from that, it is also blessed with steep cliffs that add to its uniqueness and picturesque ambiance.

Aside from its beaches, Santorini is also known for its wine. Due to past volcanic eruptions, a mixture of volcanic ash, pumic stone, and pieces of solidified lava now makes up the soil of the island which creates the spicy taste and unique flavour of Santorini wine. Tourists enjoy relaxing along its shores while sipping on wine with the magnificent sunset in the background. Tourists also enjoy going to wine tasting and wineries tours.

The scenic view of Santorini almost always overshadows everything else about this beautiful island. However, another thing that is worthy of praise is their local food.  Alongs these beaches are an array of restaurants and hotels offering the best food and services. Greek cuisine uses a variety of ingredients, influenced by Mediterranean, Ottoman and Italian flavors. Probably the most famous dish is Fava, which is a yellow split pea purée, served warm with olive oil and lemon, topped with chopped onions or capers. The volcanic soil of Santorini is also home to a unique product which is the white eggplant. This variety of eggplant has fewer seeds than the usual purple eggplant and it has a sweet taste.

Another reason why Santorini is considered as one of the most beautiful islands in the world is that visiting it is a unique experience. Santorini is a growing volcanic island, which, although dormant, is active. The island group of Santorini is the most well-known and active volcanic center of the Hellenic Volcanic Arc in the south Aegean Sea. The visible volcanic layers provide the unique multi-colored sequences of the impressive steep inner walls of the caldera, striking the visitors who reach the island by boat.

Aside from providing the world’s greatest view, Santorini also has the most amazing festivals and cultural events. In mid-September, the island holds its most significant event called Ifestia Festival. A display of lights and colors brighten the Santorini night sky which somehow reenacts the eruption of the volcano. Aside from the impressive fireworks, the festival uses special effects in order to reenact the lava flow and the explosions of the volcano. Another popular festival is the Santorini Jazz Festival celebrated in July. During the celebration, jazz and related genre of music may be heard in the Open Air Cinema Kamari located in the town of Kamari on Satorini’s east coast.

With all these reasons, it cannot be denied that Santorini is indeed one of the best islands in the world. The best time to visit the island is between April to November when the weather is warm. From June to September, the hot weather is perfect for nightlife, swimming and sunbathing. For moderate temperatures, March to May or October to early December are best. 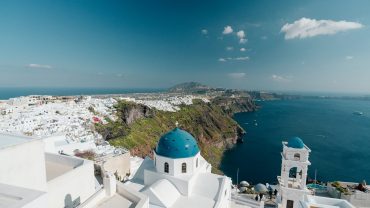 Santorini May Still Be The Safest Place After Coronavirus Pandemic

Are you a travel enthusiast burning to ‘grab some munchies and hit the road’? Or love laying down on a beach to catch some rays? But the recent CoViD-19 pandemic screws up your plans of traveling, making you worried about your safety, and then you start to think that nowhere else in this world remains […] 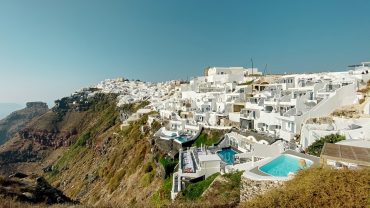 5 BEST THINGS TO DO IN SANTORINI

Known around the world for its scenic views, a stunning sunset, picturesque spots and volcanic-sand beaches, this crescent-shaped island is considered as the supermodel of the Greek Islands. The landscape and seascape of this island attract over two million tourists annually. With its growing popularity around the world, Santorini has become a head-turner […]